I don’t know if you’re as big a fan of the Far Side cartoons has folks in my house are, but they are the best. And they’re back! Well, sort of…

Just the other day Far Side creator Gary Larson posted on his site alongside 3 new cartoons. He says the new cartoons are a product of his exploring new digital tools, tablets and gizmos. He says he’s having fun again drawing.

Larson stopped making the cartoons back in 1995 because he was bored and said he didn’t want his creations to wind up in the “Graveyard of Mediocre Cartoons”. He hasn’t been drawing much since.

The box collection is a hot item during the holiday season. His books were an easy go-to when our kids were learning to read. And they’re ones my kids still pick up from time to time.

I really enjoyed the cartoons when I was younger and they were being published in the local paper. I’ve never quite figured out what made the cartoons are so funny. They have it all… talking flies, talking dogs, they’re full of bodily fluids and death. Lots of not-so-smart folks and aliens.

Some of the best ones are even just a single panel. I mean seriously, why does this one tickle my funny bone… every… time? I never get tired of watching George Washington Crossing the Street.

If you haven’t flipped through a Far Side collection, hit up your local library or but one at a bookstore. You won’t regret it. And be sure to check out his site as they share multiple cartoons every day from the archive.

And if you’re as big a fan of Gary Larson as we are, it’s time to rejoice! He said in his recent post that this is all still just “exploring and experimenting”, which is fine. I’m glad he has pen in hand and is sharing (but I really am hopeful he’ll start cranking out the funnies once again. I really could use a laugh these days).

Hope you are safe and well these days and surrounded by lots of good books.

The day before Thanksgiving has been declared the busiest reading day by Barnes & Noble. They’re basing this fact on research done during a survey project they had done. 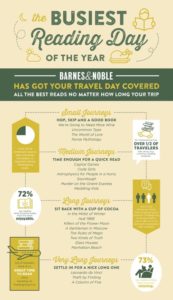 Their numbers show that more than 75% of Americans will read a book, newspaper or magazine during Thanksgiving travel this year and that more than 70% of them say reading makes their travels more enjoyable and relaxing.

I always travel with a book and magazines. I often leave my magazines at the airports, on planes and such. I guess I hope the next passenger will appreciate the magazine as much as I did, but maybe they just think “how rude!” of me for leaving my used magazines laying around.

I’ve even stumbled on BookCrossing books in the past. Even though I was not interested in reading either, I thought it was awesome that someone would pay money for a book and then leave it out so that serendipity can play a hand in landing it in the lap of another reader.

I’ve yet to leave a BookCrossing book out and about, but I probably should.

Anyway. . . one of the quirkiest numbers to come out of the Barnes & Noble study is that:

25% of Americans think bringing a great book for Thanksgiving could get them out of an awkward family conversation.

I’d have to think about that one. I’m picturing sauntering into dinner with some kind of book holster (is there such a thing?) clipped to my belt, ready to draw my paperback at the first sound of an uncomfortable topic of conversation.

Today, I picked up Matthew Weiner’s (the writer/creator behind the TV show Mad Men) first fiction book Heather, the Totality and it’s only 138 pages. I’m not sure that’s long enough to keep anyone out of many conversations.

Hope you’re planning on reading something good next week.

This year’s National Book Awards will be broadcast live over Facebook (as well as on their website) on Wednesday, November 15th, starting at 6:20pm CST. But then they’ll roll pre-recorded videos of the finalists reading, during the dinner portion of the gala, and then pick up the live broadcast when they’re done eating to begin handing out the actual awards.

Last year’s awards were fun to watch, with Colson Whitehead winning the 2016 fiction prize for The Underground Railroad, and this year’s evening looks to be brimming with more bookish greatness.

It looks like all you have to do is click over to the National Book Foundation’s Facebook page to watch the event. I watched last year on the foundation’s site, but this year it looks like they’re going after a more social-share plan. They even made a PDF ballot to download so you can play along at home.

They are @nationalbook on Twitter and they are using #NBAwards as the official hashtag for the 2017 event.

Hopefully it’ll work. It’d be fun if people outside of the industry started tuning in and looking forward to these awards.

There are four awards being handed out, one for fiction, non-fiction, poetry and young adult literature. I’m anxious to see this year’s winners as out of all 20 books nominated – I have only read Jesmyn Ward’s Sing, Unburied, Sing. And if one of the other fiction finalists is deemed better than that one (which was a great read, though I appreciated her Men We Reaped more.) I certainly want to read it!

Hope you get to tune in next Wednesday night, starting at 6:20pm CST, for the 68th year of the National Book Awards. Here is the slate of finalists for this year’s awards:

This past weekend CBS Sunday morning aired a piece on the success of Ann Patchett and her bookstore in Nashville, TN. During the seven and a half minute story they covered everything from bookstore dogs, the launching of new independent bookstores, author tours and even Ann Pachett’s writing style.

Here’s a link to the video. It’s better to click through and watch as CBS has all their embed stuff set to auto-play and I’m not going to do that to you.

When you’re done watching the video, you can click on through to Ann Patchett’s shop’s site and browse as well. Though I can attest, it’s much more fun to visit Parnassus Books in person.

I think CBS Sunday Morning should highlight an indie bookstore every couple of weeks. I feel certain they’d get all of the colorful characters, commentary and quirky video they like to have these days. Anyway, it’s a fun little interview to watch while finishing your morning coffee this week.