There is a new book coming out from the author of The Truth About the Harry Quebert Affair, which was the surprise hit of 2014.

Author Joël Dicker Twittered a teaser seven days ago announcing an the October 1st release of The Book of Baltimore: 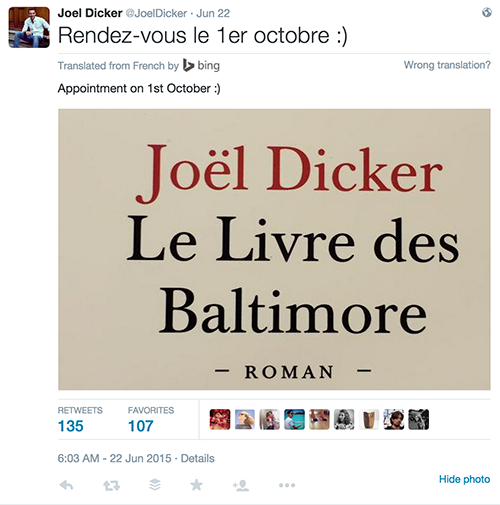 And that right there is 100% of what the world knows about Dicker’s next book.

I have recommended The Truth About the Harry Quebert Affair to countless friends and folks online. Yes, it’s 600+ pages, but it’s such a well told story with a long twisting mystery and is dripping with the wonderful world of writers, publishing and books. It was such a fun read.

I think it’s interesting that Joël Dickers’ next book is set in America, again. Dickers is Swiss and not even 30-years-old yet and I thought his next book would be set closer to his European home. But maybe he feels like he’s found another sold thread of a story. We’ll see.

The Book of Baltimore will be Dickers’ third book. His first was titled The Last Days of Our Fathers (according to Google Translate) and was a WWII story. I haven’t seen an American translation if there is one.

As long as he stays close to what he knows and enjoys writing about it’s one I am looking forward to picking up.