Just after World War I things were changing at a rapid pace here in Birmingham, AL. It was against this hasty backdrop of industrialization, cosmopolitan awareness and a sense of “popping up overnight” that the Magic City got its nickname and its first official working writers workshop – The Loafers.

I ran across this entry on BhamWiki.com and had to know more. So I trotted off to the Linn Henley Library and found the bound archived April 1977 issue of The Alabama Review. After reading the article I was blown away at the velocity with which The Loafers cranked out their articles, books, plays, screenplays, essays and short stories.

Made up mostly of newspaper folks, almost all of the original dozen or so members had pieces published  in Harper’s, Munsey’s Magazine, The Saturday Evening Post and they even had a couple of O.Henry Prize winners among their ranks.

The group was founded, in the late 19-teens and early 20’s, by journalist Octavus Roy Cohen, who also wrote fiction, plays, and scripts for Hollywood. He wrote about black life in Birmingham, but one of most popular books was The Crimson Alibi, a detective novel that also made it onto Broadway as a play.

In the 1920’s, Cohen lived in the Diane Apts. on 21st St. South and writers flocked to his place. During gatherings of the literary club / writers workshop, writers would review, critique and edit each others work. As well as cheer and jeer rejection slips, reviews and sales of their books.

I was hoping to list all of the books and works that this group churned out, but it’s just too much. No doubt – they called themselves “The Loafers” as some kind of tongue-in-cheek joke. In fact, in one mention in the January 1922 Writer’s Monthly journal , the reporter states,

“. . .the annual income from the work of the group runs well over the hundred-thousand-dollar mark yearly. . .these twelve men write seven or eight novels a year, usually about one hundred short-stories, besides poems, plays and articles.”

Adjusted for inflation that comes to more than $1.4 million dollars a year this writers workshop was bringing home.

The second generation of The Loafers was lead by Jack Bethea who was another newspaperman and the first editor of the Birmingham Post way back in 1921 when the paper was founded by Scripps-Howard. His group and the dozens after his were just as prolific as the first members.

What I haven’t been able to find is an approximate date of when The Loafers quit meeting and why. Birmingham has been flush with colorful story tellers ever since and we certainly have the setting and history to craft compelling fiction. I wonder why it disbanded. Or better yet – I wonder who would be on the roster if The Loafers was still going strong in Birmingham today?

It’s worth your while to make it down to the Linn-Henley to read the full 8 pages over a lunch break. It’s very interesting ending the April 1977 article with:

“The Civil War had provided an aura for the South’s fiction writers for half a century,. . . World War I and its swift succession of social and economic changes left little room for nostalgia and the gentler scenes it evoked. These Birmingham authors who mockingly called themselves “The Loafers” were alert to the fast-paced life around them and sensitive to human values. Whether in hot indignation at social injustices or with a small at human foibles and fantasies, they wrote perceptively of their own times.”

Of course, if that doesn’t pique your interest, as you can see from these photos, it’s worth it just to pull up a chair in the library reading and “set a spell”. 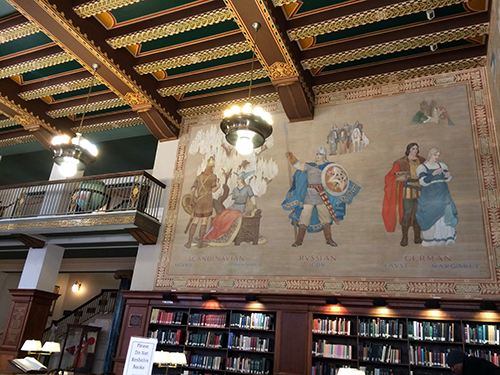 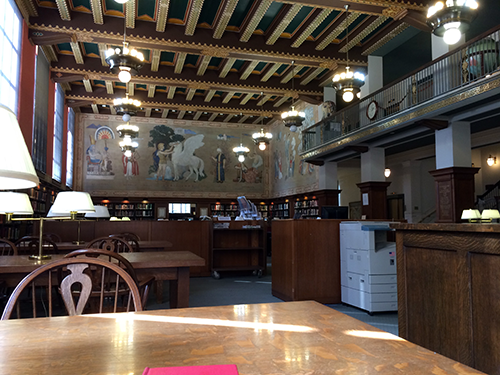