I haven’t read this one yet, but I hear good things. John G. Greer’s In Defense of Negativity: Attack Ads in Presidential Campaigns is a FREE ebook until the end of October. The publisher, The University of Chicago Press have made it free until then. So you have just a few days. 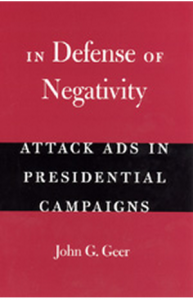 In Defense of Negativity came out in 2006 and I remember it because Greer takes an opposing view from my own: he thinks negative political campaigns are good for our country and the political system. I’ve skimmed through the book and saw some points that seemed valid, but I’m going to have to wait until I read it to really say.

I can’t argue with Greer’s notion that there are major problems within the U.S. political system. He just seems to think that we give way too much weight to negative political campaigns and that they’re not the problem at all. In fact, working through ads spanning from 1960-2004, he thinks they have contributed more to the political landscape than they have detracted.

If you’re curious too, click through to get the free download. Should be a good one to discuss over beer with friends sometime.

I have no affiliation with The University of Chicago Press Books, but if you like smart non-fiction books, their free monthly offerings were pretty good this year. You may want to sign up for 2015 through their e-mailing list. It’s free. They also have a really robust catalog of interesting books that is worth checking out.