One of my favorite new-to-me blogs is Emily Schultz’s Spending the Stephen King Money, where she is journaling what she buys with the money she makes every time a Stephen King fan accidentally buys her book.  You see Schultz’s book Joyland came out almost 9 years ago and in 2013 Stephen King released a book titled Joyland as well. 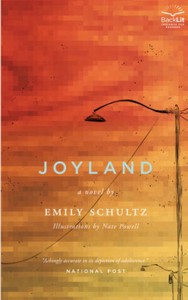 King’s book is not available in eBook, but anxious Stephen King fans searched online stores and clicked on the first Joyland title they saw… which was Schultz’s. Whether it was their error or not, a disappointed rabid fan is an irate rabid fan. So after weathering the trolls Schultz decided to have fun with it all and air everything she does with the money she makes. Plus, she weighs in trying to figure out if Stephen would like the purchase.

So check out what Emily Schultz is buying. It is shaping up like she will be having a really fun time with it. It’s just one of those things that reminds us how quirky, weird and fun the book world is.