Amor Towles’ Rules of Civility was one of my favorite books I read in 2012. It’s such a good book and so well written. I just ran across this very short interview with Towles asking about his writing and writing habits. I was surprised that Rules of Civility was written in just a year! And it was intentionally done so:

You see, that makes sense to me. That’s actually encouraging. In the interview, Towles also offers some thoughts on inspiration and finding time to write (he had two young kids when he wrote Rules of Civility). 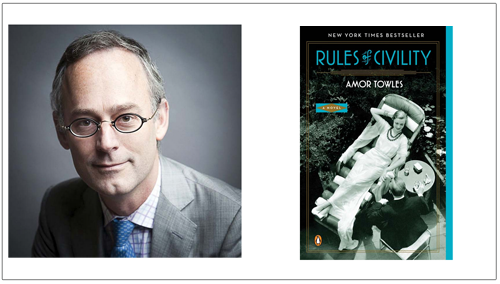 But I also like what he had to say about revising his work:

I revised Rules of Civility from beginning to end three times in three years. All of that revision work was driven by the goal of economy.

It wasn’t about just the poetry or turn of a phrase, though if you read Towels’ book you’ll see he nailed those as well. I like the idea of writing with economy in mind. That has a very ‘newspaper’ feel to it. A feel that a reader would find useful and appreciate when reading a long novel.

Go read the full article. It’ll only take you a few minutes, but it’s packed (economically so) with wonderful insights that are immediately applicable to your own writing. And Amor Towels pulls no punches when it comes to “being a writer”:

And a craft can be learned. Very insightful and encouraging!