There is a neat thing going on over on a network of Tumblr book blogs where they are sharing Ten Books That Stayed With You. It all started on this site and hasn’t lost any steam. Lots of good books being mentioned.

I like the idea of “don’t think about this too hard” and “take a photo of the ones you have near you”. I don’t Tumbl (or is it Tumblog? How do the cool kids say it?) so I thought I’d just post mine here as I can’t find a way to jump in without being on Tumblr. These are ten books that I have found myself quoting or sharing more than others. There are a couple of others as well, but I borrowed those from the library. So they were cut from the running simply because they weren’t available for the photo shoot. 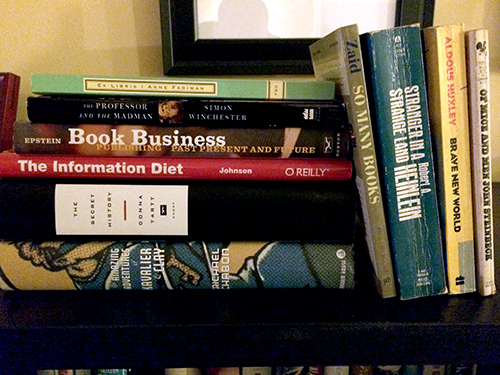 In no specific order:

How about you? Do you find you have books that have stayed with you?