Yesterday, Tim O’Reilly announced that, after a seven year run, O’Reilly Media would no longer organize their annual “Tools of Change” conference. Of course, like many I was asking a fearful “Why? What’s not working?” Which is why I was thankful to see this quick exchange between LibraryThing founder Tim Spalding and O’Reilly-founder Tim O’Reilly: 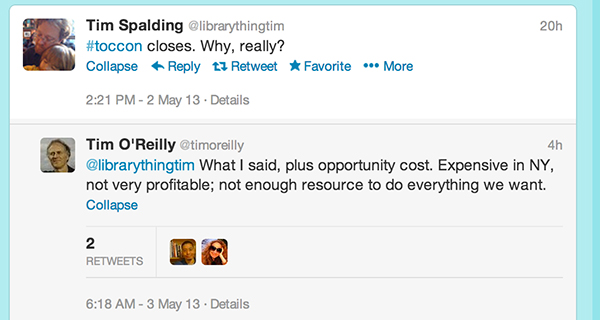 The two Tims talked via Twitter briefly where Tim O’Reilly said that there was a definite opportunity cost:

“Expensive in NY, not very profitable, not enough resource to do everything we want”.

So it sounds that, yes, as ebooks settle into their own and trends are maturing and flattening, it was really a numbers decision to pull the plug on the Tools of Change conference.

The TOC conferences have been fun. While many other digital publishing conferences have popped up over the past few years, TOC tended to focus on “high level views” of publishing and technology. While the details were mentioned and listed, there were more chats and sessions on trends and next year’s tools than this year’s strategies and products.

Speaking of which, it sounds like (paragraph 5) O’Reilly plans on rolling out their own publisher-focused tools in the coming months. I’m anxious to see what they can offer that other services and add-ons don’t already. It’d be exciting to see then apply their forward-looking experience to current publishing tools and services. We’ll see.