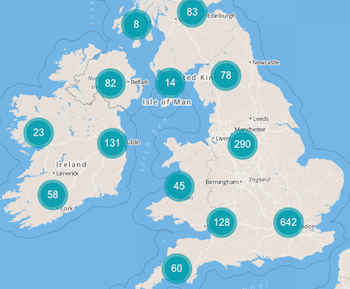 Check out this very cool interactive map of bookstores around Great Britain. You can zoom in and out all around the country and it shows where the clusters of shops are. As useful as this would be for someone living over there (or someone over here planning a vacation) I admit to being jealous in seeing just how MANY bookshops are crammed into such a small area. But before I broke out the bourbon to lament the state of U.S. bookshops I thought I should at least make sure I was comparing apples to apples. . .

Here in Birmingham, we have 6 really good independent shops and another 7 big box bookstore chains all in a geographic area of around 152 square miles and a population of around 212,000 people. So I looked around and found Brighton and Hove. It’s a seaside town, south of London, which has a population between 210,00 and 220,00, but it only takes up about 30 square miles and has 12 bookshops showing on the map. 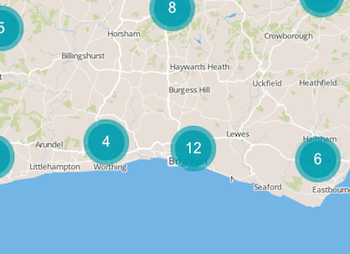 No doubt the research turned up by my few clicks around the internet wouldn’t hold up in court and with only one cup of coffee in me, I can’t even draw any really meaningful conclusions except to say that we seem right on track with the rest of the world. How often do we get to claim that?

We have some great bookstores here in Birmingham run by some wonderful people. The only thing I’d change is that I’d like more bookstores. Little shops with little eccentricities. Special book places that specialize in certain topics. And most of all… a growing populace that supports them all!