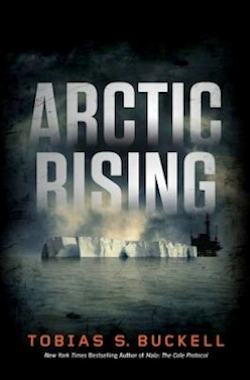 I picked up Tobias Buckell’s book after seeing two different people on Twitter mention it. I thought the setting of Buckell’s Arctic Rising (published by Tor) was fantastic. The book takes place in a future where, thanks to the almost-completely-melted North Pole,  there has been enough of a climate shift that shorelines, shipping routes and political boundaries have changed.

Over the course of a couple of decades, the land uninhabited in our 2012 world near the polar circle becomes the “new” temperate zone, allowing cities to pop up and all of the minerals and once-unreachable natural resources have now made folks north of the U.S. very important and wealthy.

It does not take long for the story to crank up as a global security patrol is shot out of the sky. The rest of the story follows the security pilot as she tries to stay alive, avenge her dead partner and figure out the conspiracy behind it all. A Google-ish type company, with all the “do no evil”, political pull and society-building, plays a major role in all of it as extremists try and use good technology for bad.

The setting, political backdrop and future technology made the book worthwhile for me, even if the plot and story telling were lacking a little. Don’t get me wrong, it is written to keep you turning pages, but it’s not exactly a “I can’t imagine how this ends” story. The stereotypical ending runs its course as it should and might feel like a political statement to some. But it certainly doesn’t get in the way of the fun ride along the way.

As a side note: the publisher places it in a newly named sub-genre called Spi-Fi, which I kind of like. I would look for more books under this moniker. Here’s to hoping Spi-Fi shelf-talkers start showing up alongside Sci-Fi.

I think Arctic Rising would be a great Summer read as it clips along fast and is set up in the arctic, which may help you cool off some while out on the beach. I give it 3 out of 5 stars.