The folks over at We Love Typography are mobilizing the world’s font faithful in a very cool new project mapping cool fonts around the world. To participate all you have to do is have the iOS Instagram app installed, have geotagging turned ‘on’, snap a pic and upload it with the tag #wlt or #welovetype. Then the crawlers will grab it an place it on the correct place on this Google Map. 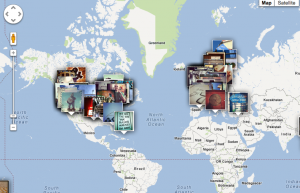 No doubt it’s going to get crowded fast. But it’s a great idea.

There are also two new FREE iOS apps for font and type geeks:

Fontli, has an Instagram-feel, and is trying to build a social network around fonts. The idea being that you could submit a snap shot of some type and your virtual rolodex of font-ish friends could help you identify it. Also, there is…

Fontmaker, which lets you create your own font variations to use in text messaging and emails sent from your mobile device. Not super-useful, but I could see where some would get a kick out of throwing in some random ligatures and letter forms.