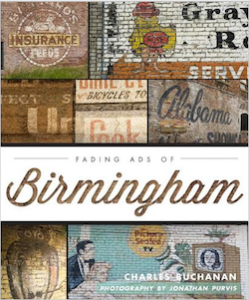 On November 29th, at 4:00 p.m., the Alabama Booksmith will host the launch event for Fading Ads of Birmingham, authored by Charles Buchanan. Buchanan is a magazine editor at UAB, overseeing publications like UAB Medicine, as well as contributing to the flagship read UAB Magazine. Buchanan is also a well respected (and collected) print artist. That’s how I first met him years ago, by buying some of his prints. And it is why I was excited to learn that he was the pen behind this new book about Birmingham and some of its curious and historical artwork decorating the city. Spend five minutes visiting with Buchanan, at one of his shows, and he’ll guide you in a budding appreciation and wonder of all of the cool architectural artifacts in Birmingham’s past. No doubt that sense of story, history and place will come through his 168 page book (sporting 88+ photos).

Buchanan was kind enough to take a few minutes and answer do a quick Q & A, via email.

Q: How did the idea for this book come about?

A: The “ghost signs”–the old faded painted ads seen all around town–have inspired my printmaking for a while. I like the look and feel of the ads, particularly when several are layered on top of one another, and you see bits of all of them at once. In 2010, Birmingham Magazine asked me to write an article about the city’s ghost signs. Less than a year after it was published, The History Press contacted me, asking if I had ever thought about writing a book on the topic. I had thought about it, but I never expected I would be doing it so soon.

Q: How long did it take you to put it together?

A: It took about a year. The research was the most time-consuming part because there’s no direct way to research the ads. The companies–and in most cases, the people–that painted them are long gone, with no records. The ads weren’t intended to be permanent, anyway. I had to dig through lots of city directories, newspapers, maps, and photographs to piece together the stories of the advertised products and services and the buildings and neighborhoods where the ads hang. I ended up finding far more information than I had expected.

Writing the book presented a few challenges as well. I had better luck writing the first draft using pen and paper rather than a computer. That helped me to avoid editing myself too much in the beginning.

Q: Why is it important to chronicle the types of things your book does?

A: In much the same way that archaeologists can tell how people lived centuries ago from shards of pottery, the ghost signs reveal the history of everyday life in Birmingham from the 1880s through the 1980s. The ads tell us what people spent their money on–what they ate, drank, and smoked; where they worked and played; what products and services they thought would improve their lives; and so forth.

Also, these signs have made a good effort at sticking around, but they won’t be here forever. At least one ad featured in the book has already been painted over, and some others will eventually fade in the sun. In a way, the book (which features photos by local photographer Jonathan Purvis) helps us to hold on to the signs.

Q: When someone puts down the book, what is something you are hoping they take away with them?

A: I hope that the book encourages people in Birmingham to explore their own city. There are so many great details, stories, and opportunities to discover when we really pay attention to the buildings, people, and landscapes around us–and much of our history is so visible and accessible. I’ve listed locations for every ad in the book so that readers can go see the signs for themselves, and hopefully that will inspire them to look for other fading ads around town.

I’d also like the book to bring attention to the work of the sign painters who created these ads. Many of them were very talented artists who worked hard in tough conditions and never received much recognition for what they did. And they did everything by hand. Hopefully readers will think about those guys when they walk or drive by a fading ad in the future.

Q: What’s  the coolest thing you ran across while writing the book?

A: The ads opened the door to some fascinating pockets of local history that surprised me. For instance, Birmingham was once full of homegrown soft drink companies making all kinds of crazy colas that got regional, national, and even international distribution–things like Celery Cola, Rye-Ola, and Wiseola, which is my favorite because one of its wall ads remains in town. Another sign, for a piano company, helped to reveal Birmingham’s important role in introducing Southern jazz, blues, and gospel music to the nation. I had no idea about these particular aspects of our history before I began researching the ads, and it felt like I was exploring a whole new Birmingham that I never knew existed.

Q: What’s your day job? On twitter? got a site for people to check in on?

A: On Twitter, I’m @cbprints, and my new web site will be up in the next few days at www.cbuchanan.net. The new site includes plenty of book info, including events and places to buy it, as well as a Google map to help people locate the fading ads in the book. My new blog on the site also will have book and art updates–and eventually it will highlight some other local ghost signs that aren’t in the book.

A: If anyone has questions about the fading ads once they’ve read the book, I hope they will e-mail me. I’m happy to share what I know about the signs and what they reveal about Birmingham’s history.

If you miss the launch event on November 29th, don’t despair. He will also be doing a book talk and signing at Homewood Public Library on December 6th at 6:30 p.m. As well as a signing at What’s on Second on the evening of December 7. 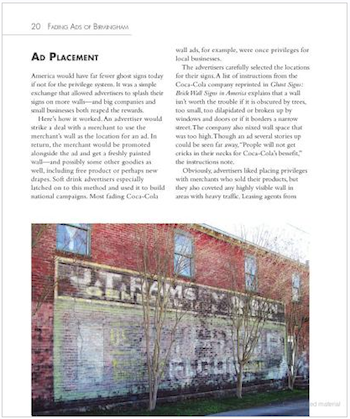 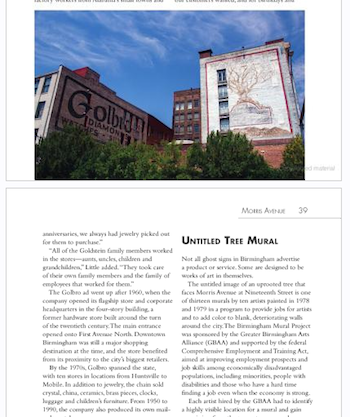 One thought on “Fading Ads of Birmingham”