I’m reading fiction again. And it feels good. Last year my non-fiction TBR pile was massive. I was so behind on reading stuff for work and other topics, that I imposed a self-inflicted fiction fast for 12 months. It ended earlier this week. It was certainly worth it. I read 32 non-fiction books over the 12 months. All of which add up to make me better at my job and to be generally better informed. I mean, we read not only to escape, but to improve ourselves. Right?

But there’s nothing like burning through some mind candy. I started out with two. I am about 50 pages into Ninni Holmqvist’s The Unit. I’m going to give it to 150 pages, before deciding if it’s recommendable. And I finished reading Brad Meltzer’s The Book of Lies yesterday. It was so-so. But it was easy and fast. Just what I was looking for.

I don’t know if you’ve ever taken the time to think about the benefits of reading fiction, but they are there. It’s something I had never thought about until my fast and it’s something I am going to have to research some more.

April 28th is the “first issue” day for the Gregory Peck stamp. This is the latest in the Hollywood Legends series and is a ‘forever’ stamp. But why I like it is that the image used for the stamp is a still from Harper Lee’s To Kill A Mockingbird. 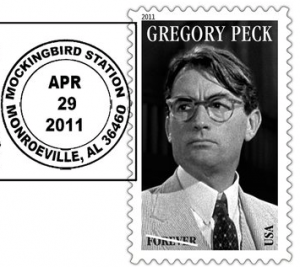 I hear the folks over in Monroeville, AL are pretty excited about this and are already planning ways to corner the market on the Peck stamp. On the 29th, they are hosting a ‘stamp release party’ and debuting their new postmark proclaiming Monroeville as the “Literary Capital of Alabama”.

I purged a bunch of books right at the end of 2010. All of them were fiction books and I managed to sell them all to a local used-bookstore for store credit. I hope they all found happy new homes. It feels good to have the extra space on the bookshelves again, but it was a pain in the patooty to search them all out and delete them from my LibraryThing catalog.

But sometimes you just have to purge. 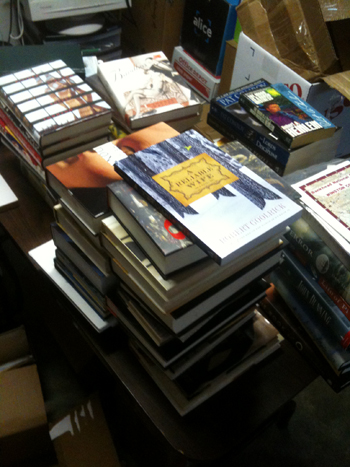 I had a fiction problem last year. It’s like having too much sugar in your sweet tea. After a while it affects your taste buds (and waist line), but I digress…. So far I am on track with making 2011 a non-fiction-only year.  A little scary. With only three months under my belt I’m already “jonesing” for a fiction fix. So this may wind up only being a non-fiction-6-month experiment. Maybe like a cleansing? Detox?

I hope your reading year is off to a great start!

I read this book back during the summer of 2010 and The Strain was exactly what I wanted for a quick summertime read. Penned by the guy behind Hellboy and Pan’s Labyrinth, you can almost see the movie playing out before you.

The premise is that the ancient virus that turns people into vampires has made its way from the Old World to the New World via a trans-Atlantic flight.

The book, being the first of a trilogy, covers all the basis. Background for all the characters ties in global business, science, World War II, and current government workings, all to build the case that something evil has always been lurking in the dark throughout history.

The first part of the book read more like CSI or a Crighton novel with all of the CDC, tech and biology talk. All of which adds to the realism (and gore). But then it turns to the mystic side when an old Jewish Holocaust survivor joins the fight and brings more history to light.

It’s a very straight forward and great sci-fi romp and I look forward to the next two installments! I give it 3 out of 5.